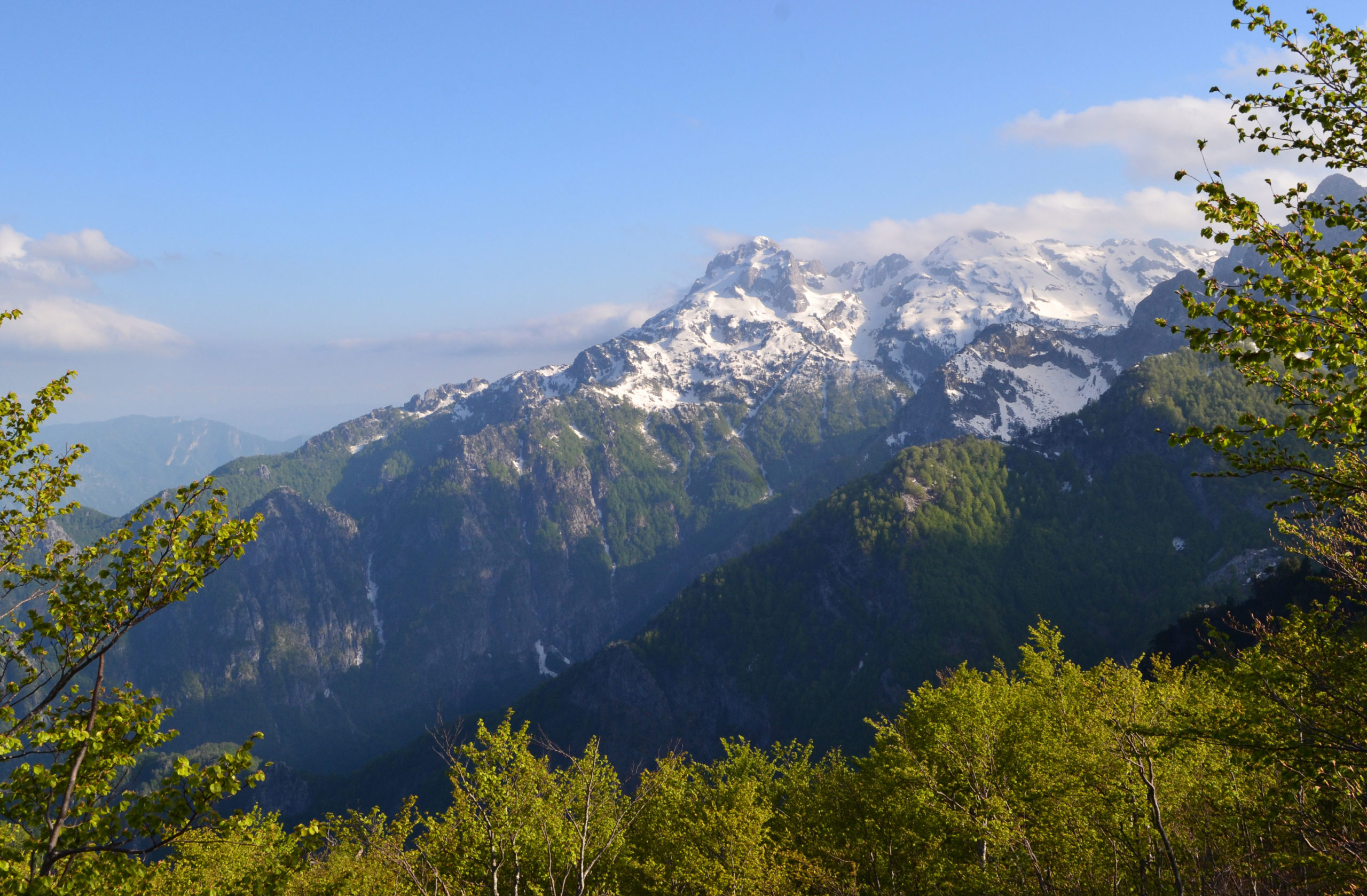 Theth to Valbona-more than just an ordinary hike (1/2)

Four students from Germany, studying sustainable Tourism at the Eberswalde University for Sustainable Development, doing an internship at EliteTravel Group in Elbasan, Albania, got four months to explore the country, culture, and mentality.
A few words about us: there is the lovely, quite crazy Nina, who loves drinking wine, the always relaxed, calm Gonzalo (a.k.a King Goni), a skater-guy from Chile, the warm-hearted and open-minded Simon, an experienced hiker, and last but not least the sweet, dreamy Pia, who can talk quite a lot.

Would you have guessed that the Albanian language in the North and in the South differ extremely, so that Albanians themselves do not understand each other?!

Even Elite Travel Group has to deal with that language barrier. Since they cannot properly understand each other on the phone, our two lovable colleagues Doret (also called Redi) and Erjon had to meet the Guesthouse owners in Theth to arrange the bookings for the upcoming season. Lucky us, because of that we could join them and combine it with a three days trip – Theth, hike to Valbona, take the ferry from Fierza to Koman, to Shkodra by bus and heading back to Elbasan. Goni had already been in Theth once, so it was just the other three of us.

But in case we would get in a delicate situation – we always kept in mind: what would King Goni do?

Our description of our journey is split into two parts: the ride to Theth and our personal impressions there, and the actual hike from Theth to Valbona as well as our way back by taking the ferry.

Our journey started in Elbasan early in the morning when Redi and Erjon picked us up. Due to the Eid Celebration Day which caused a lot of traffic, we got stuck right after Tirana for at least three hours. Even with the typical Albanian adventurous and risky driving style of Redi we were not able to move faster.

Passing through Shkodra with a quick glance at the Rozafa Castle we went on without any further problems.

Right before the road to Theth changes to a dirt road, we stopped at a restaurant, called Buni i Bajraktarit, with an insane view of the surrounding mountains. While the temperatures dropped down to pleasant 27 degrees, we decided to have some real Albanian dishes, which were outstandingly tasty – and not to forget: Rakia – always self-made, always with a glass of water. and usually the preferred drink of all Albanian men.

We continued our ride. Due to the narrow road, we had the choice of either drive close to the roadside (a few times with a nice view down the abyss) or go back to let the oncoming cars pass. The bumpy road was an adventure itself, Pia hit her head at least three times and Nina was jumping up and down till she was almost sitting on Pia’s lap.

After a stop for some refreshing spring water, Pia switched seats with the driver Erjon and it was now on her to get us safely to Theth. The road condition was not the problem but rather to reach the pedals and see the road at the same time.

But guess what?! We still made it safe to Theth, even with short Pia behind the wheel.

Due to our late arrival in Theth we immediately started a short hike to the Grunas Waterfall which seemed like good preparation for our actual hike the next day.

Once we got to the waterfall, an impressing natural picture of water running down over the edge of a steep mountain into a pool of clear blue water, which was in straightforward words, or like Nina would put it, cold as hell.
But brave Simon went into the water as if he would take a bath in a hot tub. He is just, let’s say, special.

At our hike back we stopped at a bridge, Erjon calls it lovingly “making out spot”. While Simon went back to the waterfall for a refreshing swim the others went on until we had to cross a river. Since we are on an adventure we surely did not want to take the easy way by walking over a big water pipe. Instead, the self-styled double trouble team, Nina and Pia, tried to conquer the torrential river by walking through the…as mentioned before, cold as hell water.

So, guess, did we make it to the other side with dry clothes?

Indeed, we did. Pia almost fell into the water because of the stream, but in the end, just her shoes dipped into the ice-cold water for a second, an accidental quality control of her new shoes and the result: waterproof.
By a drink at Kulla e Ngujimit, we enjoyed the cold, fresh breeze and waited for Redi and Erjon to fetch us.

Starved from the little adventures we had a very delicious dinner at the Bujtina Polia Guesthouse. We got the most delicious potato soup, Nina is still dreaming of it. Besides the further meals like tomatoes with feta, chicken wings and potato wedges that we had…and you can probably guess – Rakia for drinks!

While enjoying one Raki after another, the kind owner of the guesthouse told us a few stories and anecdotes. In fact, the church in Theth was a hospital in the 60s, when Albania, as the first atheistic country, forbade any religion. Also a quite interesting fact:

If you spill Raki, put water on top! Otherwise, it will get you bad luck.

Good night for now and to be continued…

We use cookies to ensure that we give you the best experience on our website. If you continue to use this site we will assume that you are happy with it.OkPrivacy policy